It’s Been a Bad Week for Us Old Time Fans 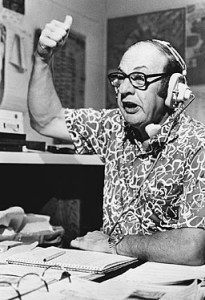 One day after several million or so of us were punched in the gut by news of Harry Kalas‘ sudden death, we hear that another of the greats, Les Keiter, has died. I suppose there’s some comfort in the fact that Les was 89, but it’s a big loss nonetheless.
I was general manager of the Hawaii Islanders back in the late 70s (see previous post) when Les was doing play-by-play for the club. If anyone could be described as a legend, it was Les Keiter. He did all the major sports, including boxing, and all with a similar style: with gusto.
Les was one of the originators of the recreated baseball games, getting the most basic reports of away games by phone — Islander 7th: Stimac out 6-3, Perlozzo singles to left, Beswick hits into 4-6-3 DP — then making up all the details, complete with sound effects for the radio audience.
He loved it when someone would spot him on the street during the day and say, “Hey, I thought you were in Tacoma!”
It’s been a lousy two days.

Previous Harry Kalas: the Best of the Best
NextOn the Road Again