Australians Really Know How To Make Their Point

In several earlier posts I’ve talked about the ongoing problem of trains hitting cars at grade crossings. Just yesterday, there was a report of a fatal accident in a suburb of Halifax, Nova Scotia. I see similar reports from around the U.S. probably three or four times a week.

For the record, in a train-car collision, the train never loses. Not ever. 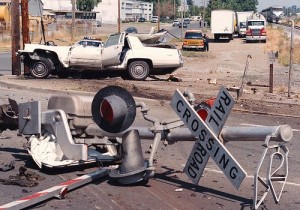 Evidently, they have the same problem in Australia, where these incidents are called “level crossing accidents.”

The Aussies, of course, are much more in-your-face about this than we would probably be. Take, for example, the large billboard in the Perth railway station:

YOUR FAMILY WON’T HAVE TO SCATTER YOUR REMAINS.
THE TRAIN WILL DO THAT FOR YOU.