During the Indian Pacific’s three-and-a-half-hour stopover in Adelaide, I took a bus tour of the city. I really like this town. It has a very open and comfortable feel to it, well laid out with wide streets and numerous parks. 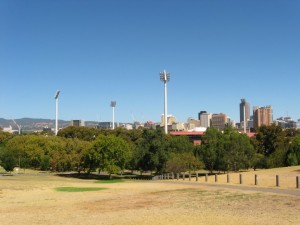 Halfway through the tour, we stopped in one of the parks where, we were told, the locals come to soak in the great “view” of their city. Apparently, this little rise is what passes for a hill in these parts. (Those light towers are for the local cricket stadium.)

Once underway again, the train heads north then angles westward, passing through Port Augusta, leaving the Southern Ocean behind and, just as the sun sets, striking out onto the Nullarbor Plain. 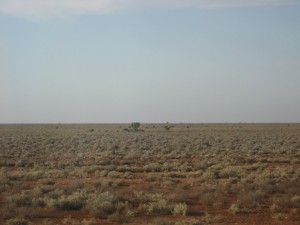 Morning finds us rocking along across this incredible, desolate vastness … blistering sand dotted with low gray-green brush extending to the horizon and for many hundred of miles beyond. Click on this photo and you will just be able to see a herd of wild camels, probably a quarter of a mile away. 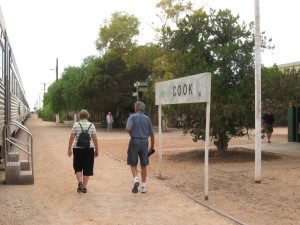 About an hour after breakfast, the train reaches the dusty little town of Cook, originally established to service the steam trains that stopped here. With the advent of diesel locomotives, the town’s original population of some 35 souls declined and is, as of the moment we arrive, two! 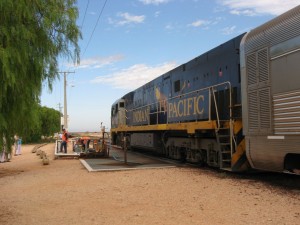 While passengers wander around greater metropolitan downtown Cook swatting at the flies, the two locomotive drivers handle the refueling. Supplies for the two-soon-to-be-four inhabitants of the town are off-loaded and taken into one of the dusty buildings. 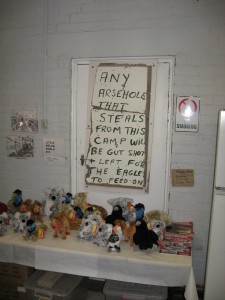 Cook’s two residents, both ladies, are busily selling souvenirs to passengers in their little shop. In response to a question, one informs us that the population of their town will double in three or four days when their husbands return from a fishing trip, 150 or so miles due south at the Southern Ocean. 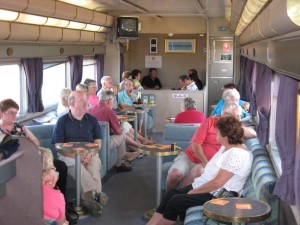 Thirty minutes after our arrival, the Indian Pacific is underway and heading westward once again. The Nullarbor landscape changes subtly – from no trees to some trees, from yellow sand to red earth – and there are occasional sightings of wedge-tailed eagles and dingos, the wild dogs of Australia. Life on board settles into an easy low-key routine, with cold beverages in the lounge car. Offhand, I can’t think of anywhere else I’d rather be at this particular moment.
Tomorrow: More of the Nullarbor and we pass a derailment.