There was a bit of grumbling at breakfast in the morning. Some of the first-time train travelers had trouble sleeping last night and, truthfully, the ride was a bit rocky. According to one of the train crew, there is indeed a rough section of track back there in the Blue Mountains. As usual, however, I slept quite well.

The Indian Pacific reaches the mining town of Broken Hill at 6:40, and coffee, tea and pastries are served prior to arrival. And – God forbid anyone should feel any hunger pangs – there will be two full-on breakfast sittings right after our 8:20 departure. 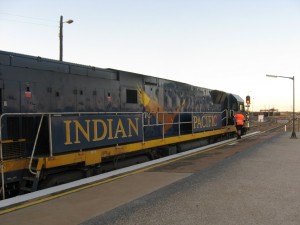 That allows an hour and 40 minutes for a change of drivers — that’s what the Aussie’s call the engineers — in the locomotive (above) and for topping off with fuel and water. There are two drivers in the train’s head end, by the way, and they trade off roughly every two hours. 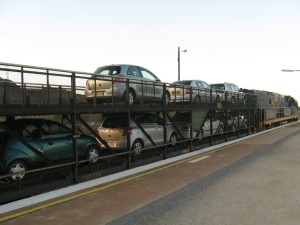 Some passengers elect to take their personal cars along with them to their destinations. Other cars are being delivered to people at major stops along the way. There are two auto carriers on our train, located immediately behind the locomotive. 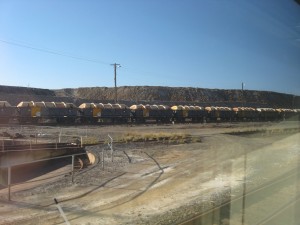 The Broken Hill area is rich in minerals, with silver, lead and zinc in serious quantities. Many of the “hills” around the town are, in fact, made from material dug from the various mines.
Passengers who take off on foot to see a bit of the town are advised to wear a hat and to use sun block (Aussies lead the world in skin cancer).
I begin my excursion by wandering up and down the platform where I have the first of several encounters with Australian flies, lots of them, buzzing aggressively around my head and face. After ten minutes or so, I retreat to the lounge car and another cup of hot coffee. It is, after all, only a bit after 7:00 in the morning! 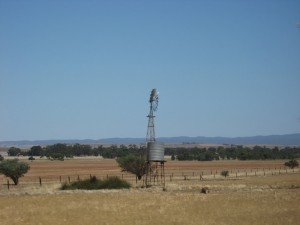 By noon, the Indian Pacific has take a hard left and is heading due south toward Adelaide. The dry arid landscape gives ‘way to more fertile farmlands which produce an abundance of grain and hay. Lots of sheep and some cattle around these parts, too. 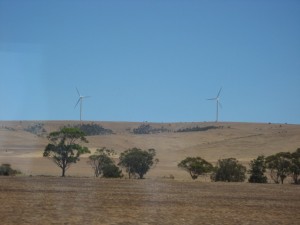 More and more wind turbines are being erected to generate electricity. We passed a double flatbed truck carrying just one of the turbine blades. It was fully half a city block long. 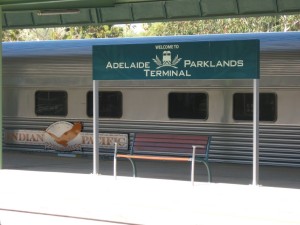 Our stop in Adelaide will be just over three hours … time to change both operating and on board crews and re-stock the dining and lounge cars. Time, too, for many of us to take one of the optional tours. There has been a ferocious heat wave here for the past two weeks with temperatures well up over 100 degrees every day. Today is mild by comparison, but I elect to spend the time here in an air conditioned bus while seeing something of the capital city of South Australia.

Previous Photo Recap: Day One on the Indian Pacific
NextPhoto Recap: Heading West Onto The Nullarbor