Photo Recap: Day One on the Indian Pacific

Over the next several days, I’ll be posting photos taken on my recent trip to Australia. My rail adventure began in Sydney, where I boarded the Indian Pacific for the three-night, 2700-mile journey across the continent to Perth. 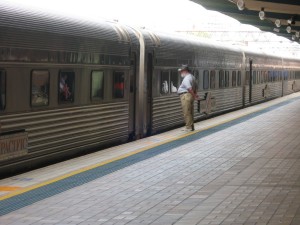 I arrived at the Sydney station almost two hours before the scheduled departure time, eager to start my trans-continental trip on the Indian Pacific. Crews were busy stocking the train and washing all the windows. And, naturally, other train travel enthusiasts who got there ahead of me were checking out the consist. 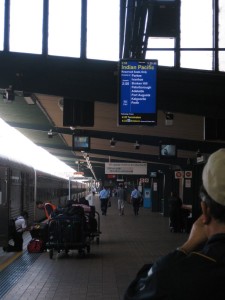 With a half hour to go before departure, passengers began to show up and were directed to their respective cars – they’re called carriages in this part of the world – by members of the on board crew. Today’s train is made up of 18 carriages, including a power car that provides electricity for the train and runs the A/C, and a crew car. The train is not quite a third of a mile long, weighs 820 tons, and is all being hauled by a 4000 horsepower diesel-electric locomotive. (Yes, that’s right: one locomotive!) 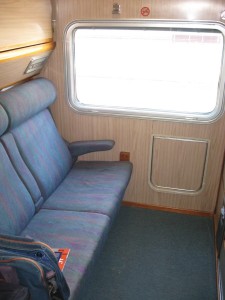 It’s difficult to get a good photo of the Gold Class sleeping compartments, but this is where I spent three very comfortable days. The sofa back folds down into a very comfortable bed. The upper berth folds down from the wall above. To the right, and unseen here, are two narrow closets and a door leading into a combination washroom with fold-down sink and toilet, both of which empty directly onto the tracks. With both of those ‘facilities’ in the up position and a curtain drawn in front of the door leading into the compartment, the little room becomes a very serviceable shower providing plenty of steaming hot water. Absolutely delightful. 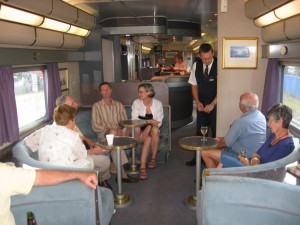 Minutes after our 2:55 p.m. departure from Sydney, the well-stocked bar in the lounge car opened and passengers gathered for a welcoming reception … a good chance to meet some of the people we’d be traveling with over the next three days. Champagne generously provided by Great Southern Rail. 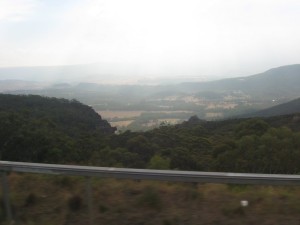 Within two hours after leaving Sydney, the Indian Pacific began a climb up into and across the Blue Mountains … not nearly as rugged or spectacular as the Rockies, but more like the Blue Ridge Mountains in Virginia – forested and quite tranquil in appearance. Interestingly, the forest consists mostly of gum trees which, collectively, emit the mist that hangs over the valleys here.
More tomorrow.

Previous A Brief Word About the Terrible Bush Fires
NextPhoto Recap: A Stop at Broken Hill