Darwin and Points South on The Ghan

It was, nevertheless, a very enjoyable trip. I enjoyed my 18-hour stay in Darwin as well as the chance to see the vastly different countryside the train passed through for the first 8 or 10 hours south of there. That part of Australia is very tropical and, although a lot steamier than Hawaii, I nevertheless felt quite at home. For one thing, although many of the names were different, I recognized most of the trees and a lot of the vegetation.

At any rate, now that I’ve completed the two train journeys, I think my main observation is that the scenery was … disappointing is much too strong a word … let me say less spectacular and not as varied as I had imagined. However, and I know this sounds contradictory, I found the views out the train windows more interesting than I had expected, and on two levels.

First, after a while I began to notice constantly changing, but subtle differences as we traveled … more shrubbery, then less, then none, then more again; almost wild swings in the variety of colors; fewer trees, then more trees, then taller trees, then no trees (except there somehow always seemed to be one way off on the horizon); red dirt one hour, sandy colored dirt the next. The only constants were hot, barren, dry and remote! It’s no wonder that 80 percent of Australians live along the coastlines on 5 percent of the land area.

And second, after traveling across all those miles and miles, my admiration and respect for the people who live in the outback – not to mention those who first settled here – has increased a hundred fold. These Aussies are really something!

As with the east-west trip on the Indian Pacific, the Ghan stops two or three times along the way to provide opportunity for passengers to get off and take optional tours of the surrounding areas. Our first such stop on the Ghan – pronounced gan, as in ran, by the way – was in the little town of Katherine, population something like 7000. It’s the third town in the tiny print under “Darwin” on the map below, and is about 200 miles south of Darwin.

I hopped aboard a van driven by a 60ish woman, a third generation resident of the little town. Her commentary during the two hours was marvelous. She deliberately avoided talking at any length about the big-name people who first settled in the area. Instead, she spoke of several townspeople who, in her lifetime, had made significant contributions to the area. 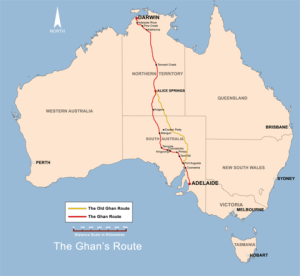 For instance, there was Dr. Clyde Fenton, one of the original “Flying Doctors.” Starting back in the 1920s, these men flew every possble kind of aircraft miles and miles off into the outback to treat sick kids, injured stockmen (cowboys) and anyone else who needed emergency medical attention and radioed in for help. Dr. Fenton’s plane, an ancient deHaviland Gypsy Moth, is on display in a corrugated metal “hangar”, part of the town’s interesting little museum. 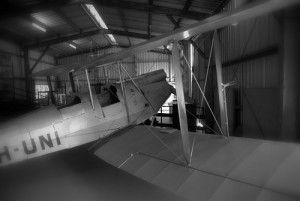 Doctor Fenton was an excellent and dedicated physician, but apparently his skills as a pilot left a bit to be desired. In the first few years of his airborne practice, he racked up a total of 75 “mishaps” with his plane. This proved to be an embarassment to the authorities and, after due consideration, they came up with a solution to the problem: They stopped counting.

The local school in Katherine is named for the good doctor, who died in 1982. 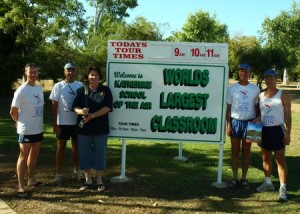 And on the subject of schools, this little town is also home to the Katherine School of the Air, where a staff of 17 teachers is linked to more than 200 students living in remote areas throughout the Northern Territory, sometimes hundreds of kilometers from any school. Teachers and kids sit at computers that are linked by satellite.
It all works wonderfully well … except perhaps for the school choir. What with signals going back and forth between teacher and pupils, and up and down between the satellite and multiple locations, the resulting delays of up to several seconds make the singing a bit raggedy. “But,” laughs the young choir mistress, “we’ve learned to cope.” These kids, by the way, test as well or better than their contemporaries throughout the rest of the public school system in Australia.
See what I mean? These Aussies are really something.

Previous Across the Nullarbor to Kalgoorlie … Maybe.
NextWhat Do These Aussies Know That We Don’t?