Across the Nullarbor to Kalgoorlie … Maybe.

The closer the Indian Pacific gets to Adelaide, the more conversation in the lounge car has to do with the bad derailment that occurred five days ago at the far side of the Nullarbor Plain, just east of Kalgoorlie. Torrential rains undermined a stretch of track and the resulting derailment of a freight train has left rail cars scattered and, so we had heard, chemicals spilled.

This particular wreck has real implications for us: Will the mess be cleaned up and the tracks repaired by the time we reach that location some 36 hours from now? In fact, the train that left here four days ago was forced to turn back and many of those passengers have been put up in hotel rooms here in Adelaide and will be boarding this train, ready to give it another go.
We had been reassured upon our departure from Sydney that there was a “95 percent chance” we would get through, but that element of doubt had been weighing on many of us.

Shortly after our arrival in Adelaide, we get the latest report: The track is still not cleared, but a work crew is constructing a “deviation” – a temporary track skirting the pile up – and that was expected to be completed by the time we arrive tomorrow in the late afternoon. Let’s hope so: It would be a helluva long way to back up!

Underway once again, we retrace some of the route from yesterday, then swing west and strike out into a long stretch of outback that will continue with only varying degrees of desolation until we (hopefully) reach Kalgoorlie around dusk tomorrow.

Morning light finds us well out on the great Nullarbor Plain, flat as a tabletop, stifling hot and hopelessly arid. Nullarbor, by the way, comes from the Latin meaning no trees. (Yeah, I did an ah-HAH!, too!) 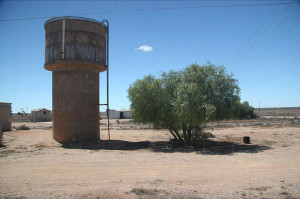 Shortly after breakfast, the Indian Pacific stops at the town of Cook … today’s population, two. Tomorrow, or possibly the next day, that number will double when the husbands of the two ladies selling souvenirs in the little shop return from a fishing trip which has taken them more than a hundred miles cross country to the south. Well, says one of the passengers, at least the ladies will have fresh fish when they get back. “Nah,” says one, “the blokes will have eaten them all long before they get home.”

After thirty minutes, the Indian Pacific is rolling westward again. To my surprise, the Nullarbor Plain is actually very colorful: earth in dark and light reds and browns, and multiple shades of green from a variety of brush and grasses and scraggly trees. Sometimes it’s almost devoid of any vegetation, but can actually be thick with brush and trees 15 or 20 miles farther on. 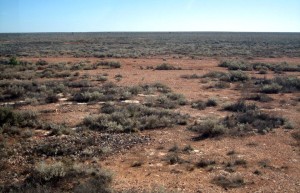 W edge-tailed eagles are seen soaring overhead and several people report spotting some dingos, the wild Australian dogs. There’s a burst of excitement just after lunch when a herd of a dozen camels is spotted a quarter mile or so off to the left. I was resigned to a long boring stretch for most of this day, but it has proven to be anything but that.

At about 6:00, the Indian Pacific approaches the derailment site, slows to a crawl, then stops. I have visions of twisted wreckage and broken rails barring our way up ahead but, after three or four minutes, a freight train slowly passes on our left. A smattering of applause breaks out from the three crew members in the lounge car, for this means the freight has been successfully routed around the derailment site. And if the freight can pass, so can we.

Note: I will be aboard the Ghan for the next two days, en route from Darwin to Adelaide, but will report again sometime on Friday (Thursday east of the dateline).

Previous So Who Actually Rides These Two Fabulous Trains?
NextDarwin and Points South on The Ghan