Second Day Aboard the Indian Pacific

Broken Hill is Australia’s famous mining town and it’s also the first serious stop for the Indian Pacific on the first morning of its three-night trans-continental run from Sydney to Perth.

It comes early, however, before breakfast, so the Indian Pacific’s dining car crew provides coffee, tea, juice and some pastry for those interested enough to leave the train at our 6:40 arrival to see a bit of the town. There are quite a few of us up early for the early snack; not nearly as many up for trekking around this town. 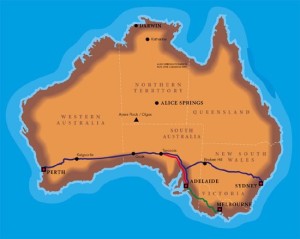 We’re underway again by 8:30 and now the dining car is dishing up full-on hot breakfasts. The food and the service are equally top notch, with all meals included in Gold Class fares. Wine and beer are extra. Passengers eat in two sittings for all meals and there’s plenty of time allowed between sittings for leisurely meals and relaxed conversation.

Red Class accommodations include a coach car and a sleeper with two-person compartments. These are described as “almost impossibly small” by one of the passengers who inspected these compartments, but clearly he has never seen one of the roomettes on an Amtrak Superliner. (That’s not a knock. Small works just fine when it’s well-designed.)

Red Class passengers are for the most part younger (a lot younger), may be traveling shorter distances and are on a more limited budget. There is a buffet car for those folks with more basic food available for purchase.

By 3:00 in the afternoon, we’re rattling through the suburbs of Adelaide, coming to a stop at the station at 3:15. There has been a horrific heat wave here for the past 10-12 days with temperatures running well over 100 degrees Fahrenheit on a daily basis. Today, however, is much nicer and many of us opt to take a bus tour of the city. We return two hours later universally impressed: the streets are wide and tree-lined, government buildings impressive, and the overall impression is that this is a very attractive city that is people-friendly … and, I must add, filled with friendly people. I’d like to come back for a much longer visit.

We get a new crew here. My hospitality attendant, Linley, has handed me off to Matt, who starts things off by doing me a great service. A cleaning crew has gone over the train while we were seeing Adelaide and I return to my compartment to discover that my widow has been washed, but brown streaks of dirty water remain behind.

As I am contemplating the prospect of looking (and taking photos) through dirty windows for the next two days, Matt pops in to see if everything is OK. I point to the window and he reacts as though jolted with an electric current. He heads off down the corridor and minutes later one of the conductors looks in, mutters “This will never do” and disappears. Five minutes later, a crew appears outside the train with buckets, hoses, long-handled scrubbers and squeegees … and – voila! – the windows are once again properly and sparkly clean. Impressive!

At 6:40, we’re rolling again, retracing part of the route we followed to enter Adelaide. As the passengers assigned to the first sitting file into the dining car, I settle into a chair in the lounge car with a glass of wine and chat with a retired couple from the Hunter Valley north of Sydney. He is a bona fide character, with irreverent and hilarious opinions on any subject. And if you lost the Aussie accent and gave him a little hop in his walk, he’d be an absolute double for the old character actor, Walter Brennan.

The following ninety minutes include plenty of conversation, another glass or two of wine and –Oh, my! – it’s time once again for another superb meal. As we file into the dining car, all laid out with fresh linen and sparkling table settings, I think: Is there a better way to travel? Nope … no way!

Previous Seven Hundred of Them Gums, By Gum!
NextSo Who Actually Rides These Two Fabulous Trains?