Riding and Dining Across Australia in Style

The Indian Pacific rolled sedately into Perth this morning at 10:40 – dead on time.

The trip was really excellent. I’ve always found that most people, rail enthusiasts or not, are mainly interested in hearing about the accommodations and the dining experience, so I’ll spend a little time on both for this first post. 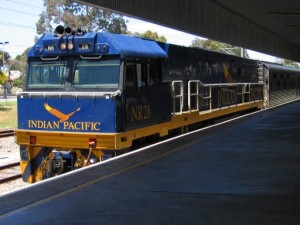 I was comfortably settled by myself in a two-person compartment consisting of an upholstered bench-type seat, with two small but adequate closets. The seat converted to a comfortable berth at night, with a second bed that could be folded down from above.

Each compartment has its own bath, quite compact, but again very adequate. Both the sink and the toilet fold down from the wall and go back up again after use. Both empty onto the track in the way such facilities on American trains used to do. Trust me: over 99.99 percent of the Indian Pacific’s route, this is not a problem! (During some of the longer stops along the way from Sydeny to Perth, there were announcements asking passengers to use restrooms in the stations.)

The shower works wonderfully, with a curtain that’s pulled along a track to cover the wall containing wash basin and toilet as well as the door leading into the compartment. Water passes through a small drain in the floor and directly onto the track below. I had a steaming hot shower all three nights aboard. Delightful.

The dining car is referred to by the train staff as the Queen Adelaide Restaurant and it certainly merits that designation. The food and the service were both excellent, with two main course choices for both breakfast and lunch and three or four selections for dinner. All very nicely prepared and presented.

As an example, these were my selections for dinner on our second night out after departing Adelaide:

– Leek and Blue Cheese Soup
– Pan-fried Pork Escolopes on Potato-Carn Hash, with Carrot, Yam and Prune Tagine
– Banana Cheese Cake with Passion Fruit Sauce
– A very nice salad bowl, shared by all four of us at the table.

The other main course offerings were barramundi (a salt water fish),a beef filet and a vegetarian option, a pumpkin and lentil croquette.

As with Amtrak or VIA Rail service, tables in the car are all set for four persons and passengers quickly became acquainted, with couples pairing off with new friends for meals. I was traveling solo and so got to sit with several different couples during the journey. I particularly enjoyed getting to know Peter Crawford and his wife, Pat. He’s with the BBC and was gathering audio material for an eventual radio broadcast. We discovered almost immediately that we have a good deal in common and the three of us spent several very enjoyable meals together.

More about the Indian Pacific next time. There is much to talk about