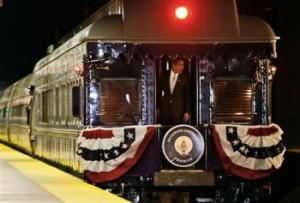 Clearly, Barack Obama’s historic rail journey from Philadelphia to Washington’s Union Station has dramatically raised public awareness of rail travel in general and Amtrak in particular. That’s wonderful, but let us hope that that awareness will evolve into some serious efforts to repair, rebuild and expand our national passenger rail system. God knows it’s way overdue.

The economy, high gas prices and turmoil in the airline industry have all spawned dramatic increases in Amtrak ridership … up something like 15 percent in 2008 over the previous year.

That’s terrific, of course, but it’s also created another problem: Amtrak trains are becoming crowded and there’s nothing much the railroad can do about that. Almost every rail car is already out there hauling people. 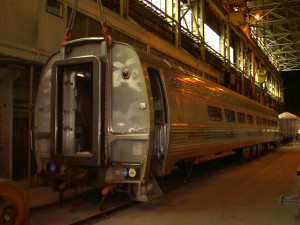 About 100 rail cars are currently in storage, but Amtrak hasn’t had the money to do the minor repairs or complete the necessary maintenance that will get them back into service … a direct result of the anti-Amtrak mind-set of the Bush Administration. The last Congress did authorize money to pay for those repairs as part of the Passenger Rail Investment and Improvement Act, but those funds still have to be appropriated by the new Congress.

Compounding the problem, much of Amtrak’s existing fleet is now 30-35 years old, which means those cars only have another 10-15 years of practical use left. New replacement rail cars have to be designed and built, but even if Amtrak got the money and a green light today, it would still be three years before the new equipment could be delivered.

All of this means the new administration and the new Congress need to get their priorities sorted out quickly and adequate funding plowed into transportation with a major emphasis on rail.

Previous The More You Learn and The Harder You Work, the “Luckier” You Get.
NextYes, Safety Comes First … But With Whom?