I’ve just made arrangements for a visit to Australia at the end of January where I’ll be taking two wonderful long distance train trips.

Travel from here to Australia is very convenient because Hawaiian Airlines has three non-stop flights a week between Honolulu and Sydney. As regular visitors here know, I’m a big fan of Hawaiian. They fly my favorite wide-body plane, Boeing 767s, and their in-flight service is really excellent. 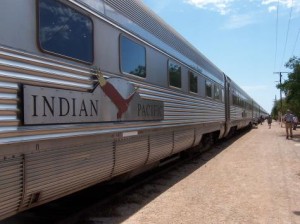 The first train ride will be aboard the fabled Indian Pacific which runs clear across the Australian continent, between Perth on the Indian Ocean and Sydney on the Pacific Ocean … and, yes, hence the name. The route – it’s the blue line in the map below – passes through Broken Hill and Adelaide on the three-night trip from Sydney to Perth.

I’ll spend a couple of days in Perth, thentake a Qantas flight to Darwin where I’ll catch the southbound Ghan. I’ll be aboard this second train for two nights en route to its southern terminus at Adelaide. Both of these trains are operated by Great Southern Rail.

After a day in Adelaide, I’ll hop a second Qantas flight back to Sydney and, from there, back to Honolulu and a quick connection for the short hop home to Maui.

I’ll be taking my laptop along and am planning to provide regular reports in this space while I’m away. Sure sounds like fun, doesn’t it!

Previous It’s Better in Imagination Than Real Life, But …
NextUh-oh! Something Has Gone Wrong Somewhere.