Several years ago, I opened the top half of the dutch door in the vestibule of an Amtrak Superliner to get a photograph. At the time, we were traveling through the Sierras just west of Truckee, California, heading up to the Donner Pass. I was trying to get a shot of the locomotives laboring up the grade and entering a tunnel.

Just as I leaned out to snap the photo, a conductor happened to come down the stairs from the upper level and gave me a severe lecture about how dangerous it was.

Boy, he should be working the railroads in India … 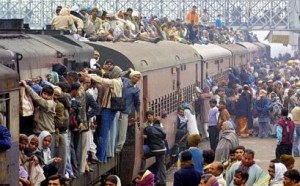 … where yet another crackdown has been announced in an effort to keep people from climbing onto the tops of the trains. Most of their railroads are electrified so, in addition to the danger of falling off, there is also the risk of electrocution. The authorities keep making arrests, but the problem persists and people keep getting killed or injured. Lots of people.

A year or so ago, a friend of mine who lives in Bangkok took a train ride through a part of Cambodia where there were occasional attacks by insurgents. As he boarded, he noticed that the locomotive was pushing several flatcars, presumably to safely trigger any explosives laid in the track.

About 20 minutes after they had left the station, as the train swept around a long curve, he looked forward to catch a glimpse of the locomotive. The four flatcars were crowded with people who had been sold tickets … at a helluva discount, I hope!

Previous Italian High-Speed Rail Competes For All Travelers
NextObama Will Go to Washington in Style … BY TRAIN!