People Should Go By Rail … and Freight, Too.

There are many very practical reasons why this country should plow a lot of resources into expanding and improving our rail transportation systems, from streetcars to light rail on through long-distance trains.

The same reasons that apply to carrying passengers by rail are also valid for hauling freight. For instance …

* One intermodal train – meaning trains that haul containers – can carry the same amount of freight that would require 280 semi-trailer trucks. Take those trucks off the highways and you’ve created room for more than a thousand cars.

* Other freight trains, those that carry everything from cars to washing machines to fresh vegetables, can take as many as 500 trucks off our highways.

* Freight trains can move one ton of goods three times as far as trucks on one gallon of fuel. 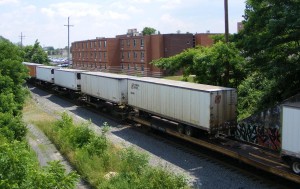 * Compared to trucks, freight trains put out one-tenth the hydrocarbons and diesel particulates, and one-third the nitrogen oxides and carbon.

* If just a tenth of the stuff now being hauled over long distances by truck were to be shipped by rail, the amount of greenhouse gas emissions would be reduced by some 12 million tons every year.

Ah, but here’s the catch: Container traffic on the country’s railroads has almost doubled over the past ten years and is still going up. The resulting congestion is costing almost $80 billion a year in lost time and wasted fuel.

Amtrak runs over track owned by the freight railroads in most of the country and their trains are also affected by this congestion. According to the last estimate I saw, passenger train delays cost Amtrak some $130 million a year … and don’t forget about 40% of that comes from our tax dollars. 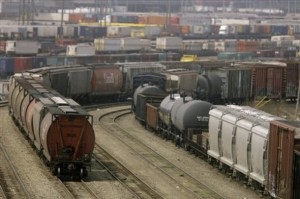 It’s going to cost a helluva lot of money to improve things. Railroads estimate that they will have to spend nearly $200 billion over the next 20 years just to handle freight traffic.

If the feds are going to plow a lot of money into the infrastructure as part of an economic stimulus effort, wouldn’t rail – freight as well as passenger systems – be a good place to put some of it?

By the way, this information was provided to me by CSX, the huge freight railroad operating all over the eastern portion of the country. That said, I have no reason to believe that any of these claims are not factual. In fact, I have seen corroborating data in material put out by the EPA.