Journalistic priorities. Whereas most of the country and darn near the entire rest of the world has recognized the election of Barack Obama as one of the more signigicant events in our history, not everyone seems to share that view. The Terrell Tribune, the daily paper in the Texas town of 13,000 a half hour east of Dallas, made no mention whatsoever of Obama’s election in their Wednesday edition, choosing to cover a local race instead.

“We covered the local commissioner’s race,” sniffed publisher Bill Jordan. “We thought that was more important.”

You shore do got a classy act there, Bill.

The times they are a changin’. For a bunch of years now, the conventional wisdom about U.S. politics has been that the two coasts are liberal and everyplace else across the U.S. is conservative. That, in turn, has fostered the notion that relatively small areas have had a disproportionate influence on politics in this country.

Well, along with the belief that a black could never be elected president, the election last Tuesday has shot that theory all to hell. The fact is, Barack Obama could have lost both New York and California and still have won the election with a margin of 8 electoral votes. If there was ever an example of how much things have changed all across this country, that’s it. 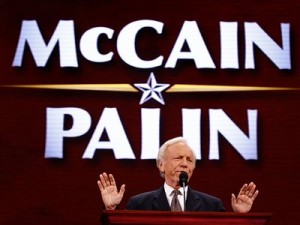 Pop (maybe) goes the Weasel. Then there’s Joe Lieberman, who was Al Gore’s running mate on the Democratic ticket in 2000, but campaigned for Republican John McCain this time around. Understandably, some Senate Democrats want to boot him out of their caucus or, at the very least, strip him of his chairmanship of the Homeland Security and Governmental Affairs committee. According to one of Lieberman’s staff, Joe says that would be “unacceptable.” If you ever need a clear definition of chutzpah, this would sure as hell be it!
The Brits got it right. And, finally, my vote for the best Election Day headline goes to one of the British newspapers: “ONE GIANT LEAP FOR MANKIND”. Gee … I bet Ol’ Bill Jordan whist he’da thunk a that!