How’s This for a Big Moving Safety Message?

I’ve written before about collisions between trains and cars or trucks at grade crossings, and about individuals hit and almost invariably killed while walking on tracks. It’s still a very big problem.

For a variety of reasons – some understood, some not – a disproportionate number of these incidents occur on Amtrak’s Pacific Surfliner route, particularly the stretch between Los Angeles and San Diego. One retired engineer recalls hitting and killing a surfer years ago. The kid was walking down the middle of the track carrying a surfboard and listening to a walkman. He had his back to the oncoming train and never knew what hit him.

Just two months ago a young woman in a Seattle suburb was hit and killed while walking on the tracks. She was talking on a cell phone. 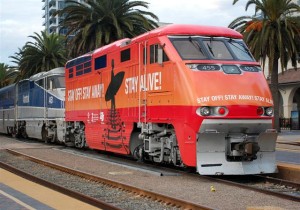 The sad fact is, these kinds of “accidents” are still happening … almost on a daily basis. To create more awareness of the problem, one of the Surfliner locomotives has recently been decked out in a bright new paint job. Let’s hope it helps get the message out there.

Previous Don’t call me, Linda. I’ll call you.
NextAboard the Southwest Chief and Headed to L.A.