In the aftermath of the presidential election, people in Hawaii are naturally talking about the history-changing win for Barack Obama, someone people here, regardless of party, are proud to acknowledge as a native son.

But folks are also talking about the snotty comments made about Obama by our Republican governor, Linda Lingle. 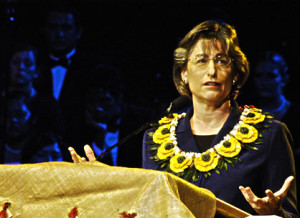 She has spent a good deal of time over the past few months stumping around the country on behalf of John McCain. That is her right, of course, although she has received a good deal of criticism for being absent from the state at a time when our tourism-based economy has plunged us into very difficult times.

But while campaigning in Colorado, Governor Lingle said, “Senator Obama likes to say he’s from Hawaii. But, the truth is, I’ve never met him in my life. He’s never called me on the phone. Ninety-five percent of the people in my state had never heard of him before he ran for president.”

She also dismissively said Obama lived in Hawaii for only “a few high school years.” Well, the whole truth is, he was born here and Governor Lingle was not. Furthermore, Obama graduated from a very prestigious and nationally-ranked private secondary school, while she graduated from a public high school in California.

There is simply no doubt that Obama’s experience growing up in this amazing multi-ethnic, multi-cultural place has shaped his view of life and of the world. That is eminently clear in his first book, Dreams from my Father.

His wife, Michelle, has said “You can’t understand Barack until you understand Hawaii.”

Unfortunately, some people come to this extraordinary place, spend years here, and just never get it.