The 13-plus billion dollar Amtrak funding bill which passed Congress on Wednesday could result in restoring two or three trains that were discontinued a number of years ago as cost-cutting measures. 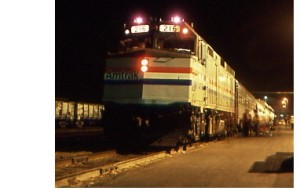 The Pioneer, with a classic F40 locomotive at the head end, stopped at Pocotello, Idaho, in the late 80s.

The Pioneer, which stopped running in1997, left Chicago as a section of the California Zephyr, but split off in Denver and headed across Wyoming, Idaho and Oregon to Seattle.

The North Coast Hiawatha crossed the southern portions of Montana and North Dakota. It was apparently quite successful, but was discontinued in the late 70s. 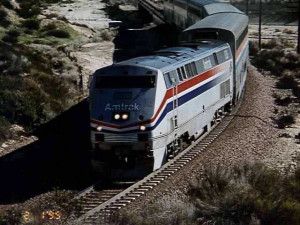 This might also be a good time to start pushing for the return of the Desert Wind. It, too, originated in Chicago as part of the California Zephyr, but went off on its own at Salt Lake City and headed south to Los Angeles. 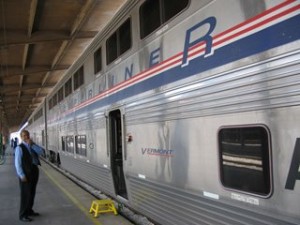 Waiting for passengers to begin boarding the Sunset Limited in New Orleans.

Before Hurricane Katrina, the Sunset Limited ran three days a week between Los Angeles and Orlando. Because the hurricane caused extensive damage to the tracks along the Florida panhandle and the Mississippi coast, Amtrak stopped running the Sunset Limited east of New Orleans. The tracks have long since been repaired, but that eastern segment has still not been restored. Perhaps this funding bill will induce Amtrak to restore that portion of the Sunset’s service.

Ross Capon, executive director of NARP (the National Association of Railroad Passengers, has a put forth several different approaches to expanded rail service that could be taken. You can go here to check out his ideas.

At any rate, having the money to provide more train service is one thing, but I suspect lack of equipment is a big part of the problem, too. Amtrak has about 100 rail cars in storage at the moment because they haven’t had the funds to make minor repairs or finish overdue maintenance that would get them back into service. The new funding bill includes a special allocation for doing exactly that, but first the money has to be appropriated, then the work has to be done. As welcome as more trains would be, it’s not likely to happen anytime soon.