Coburn, a Republican senator from Oklahoma, has formally “objected” to quick passage by the Senate of a bill providing critically needed funding for Amtrak. That probably means passage won’t come until some time in the 2009 session of Congress, a likely delay of many months. And, of course, there will be a corresponding delay in getting those funds to Amtrak.

The bill also mandates that railroads equip their locomotives with PTC (positive train control), a system that would have prevented the recent head-on collision of a commuter train with a freight train in California that killed 25 people and badly injured well over 100 more. So that, too, will have to wait. 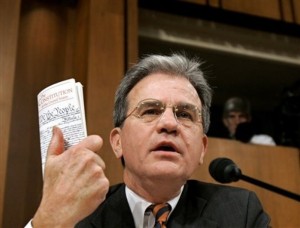 What’s so maddening about this is that the senator tries to make his case with an assertion that is so wildly wrong that you have to wonder if he or anyone on his staff gives any thought to the crap coming out of his office.

Specifically, he claims in the written statement accompanying his objection to this measure, that “Amtrak loses $2 billion a year subsidizing food.”

In other words, Senator, you’re saying that Amtrak’s entire annual federal subsidy only covers half of the money it loses just on food service??

That said, I’m going to take a deep breath, turn off the computer, go outside, fire up my tractor, and spread horse manure on our pasture. Care to join me, Senator? You’d be damn good at it!