Fall Out from the Train Wreck in California

The terrible crash of a Metrolink commuter train in the Los Angeles area has prompted calls for positive train control (PTC) systems to be installed in locomotives operated by all major railroads. Legislation mandating that has just been introduced in the U.S. Senate. 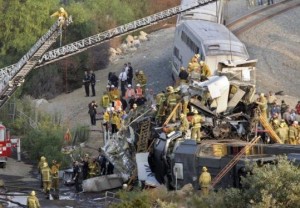 PTC is a satellite-based system that monitors the movement of trains and will automatically apply the brakes if, using the recent tragedy as an example, a train ignores a trackside signal.

Predictably, initial response from the freight railroads has been negative. They argue that the PTC technology is not yet perfected and that it would cost the industry an estimated two billion dollars to implement. As always, it comes down to money.

But another angle has popped up: The freight railroads, which accommodate Amtrak trains on their tracks only grudgingly, may discourage any additional passenger service citing safety concerns triggered by the California accident. That would certainly be too bad since, as has been reported everywhere, people by the millions are turning to rail for commuting as well as for travel over longer distances.

It’s time for the federal government to step up to the plate.

If the feds operate the air traffic control system for the airlines, and build and maintain interstate highways for the truckers, they can damn well provide financial assistance to the railroads for the PTC system … especially if that will result in more and better and safer passenger service.

And, while we’re at it, Amtrak and commuter railroads need federal help to buy new equipment to meet the increasing demand for train service.

At the moment, Amtrak has more than 100 badly needed rail cars sitting in storage because they don’t have the money to perform overdue maintenance or minor repairs. It will cost about $140 million to get those cars back into service. We spend that much in Iraq every ten hours.

Previous 100 Percent In Favor of Progress … But Not Yet.
NextDo You Remember the Definition of Insanity?