Part of the fascination of train travel comes from the occasional visual snapshot of something that’s unusual or bizarre or seemingly out of place. For example, we have just passed a boxy gray-painted house that looks like it should be standing somewhere along the Connecticut shoreline. 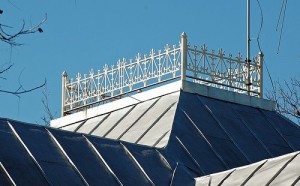 It’s shingle-sided and has what New Englanders call a widow’s walk, which is either a small deck or a kind of cupola perched atop the main roof from which women married to old-time mariners would scan the horizon looking for sails of returning ships. (I missed the shot as we passed and pulled this photo from Google images.) I suppose, in theory at least, these architectural add-ons might have served essentially the same purpose here on the great plains a hundred or more years ago. 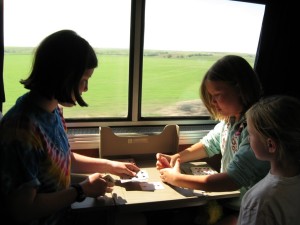 After lunch, I spend some time with the Chicago lady, whose name is Carol McManus, getting notes and quotes for the Grand magazine article. Her bright, attractive grandchildren certainly prove the theory behind the proposed article: kids enjoy train travel … playing games, eating in the diner and snuggling down into a real bed at night. But, at least with these youngsters, their favorite train travel experience has been the shower, located on the lower level of every Superliner sleeping car.

About 3:30, the Empire Builder slows to a stop and after a few minutes the conductor reports via the P.A. system that a freight train up ahead of us has reported very high winds. We’ll be waiting here until the operating crew can check with the BNSF dispatcher who will, in turn, be checking wind conditions with other trains along this stretch. (BNSF is the Burlington Northern Santa Fe Railroad, over whose tracks we are currently operating.) In due course, the conductor announces that we have been given an all clear and we’re off again, headed west toward our next stop, Havre, Montana. 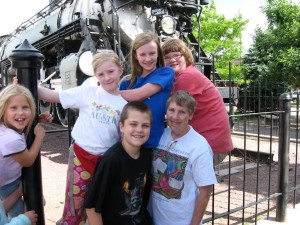 There is a wonderful old steam locomotive on display in Havre, and during the Empire Builder’s 25-minute stop there I get a nice photo of the grandma and part of her gang. They will be leaving the train at East Glacier around diner time tonight, ready to start a week of horseback riding and hiking in spectacular Glacier National Park, plus a boat trip on Medicine Lake. 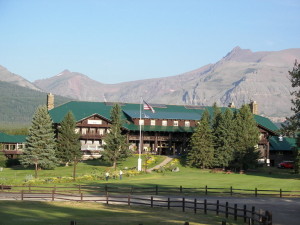 Sure enough, out of the dining car window in the early evening at the East Glacier stop, I catch a glimpse of the McManus group trooping off toward the venerable Glacier Park Lodge, a massive old building constructed by the Great Northern Railway and set back a half-mile or so from the station.

The lodge hasn’t changed very much since it was first built in 1913. I can say from first-hand experience that the floors of the guest rooms creak and are uneven, and the bathrooms have honest-to-God linoleum on the floors. (If you can remember linoleum … ) 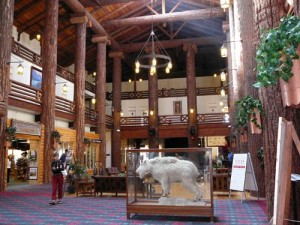