They May be Nuts, But At Least They Know What’s Really Important 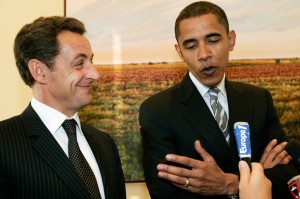 Barak Obama is a pretty smart guy. Before a meeting with French President Nicolas Sarkozy in Paris today, Obama was asked by someone in the press corps to “say something in French.”

Uh-oh … that, folks, was a trick question.

Four years ago, John Kerry was scorned and mocked by conservatives in this country – ready? – because he can speak French.

Obama, however, was prepared. He just smiled, waved, and said, “Bonjour.”

And that leaves the 2008 Swift-Boaters gnashing their teeth. They suspect Obama can speak French, but – dammit! – they can’t prove it.

Previous They’re Either One Or The Other
NextWhat’s In A Name? Occasionally Too Much.