A little over two weeks ago, on April 7th, Amtrak’s Southwest Chief came to a stop at La Plata, Missouri, on its way from Los Angeles to Chicago. From the door of a sleeping car, a beaming Chris Guenzler stepped out onto the platform and into his own modest place in the history of train travel. 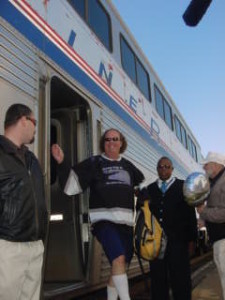 I don’t know if there was a brass band on hand, but there darn well should have been! There was a crowd to greet him, however, because Chris had, at that very moment, completed exactly one million miles over all the routes in the Amtrak system.

According to Steve Grande of TrainWeb.com, it is theoretically possible that another passenger may have traveled that many miles on Amtrak, but so far no one has stepped forward to make that claim and none are expected.

It’s also possible, perhaps even likely, that a few veteran Amtrak employees have reached that milestone, but certainly none of them would have done so by traveling every one of Amtrak’s routes.

Chris’s story is interesting, improbable and heart-warming. You can read more about this unusual man by clicking here.

Previous Harry Truman. And the Train in American Politics
NextTwenty-Five Years … and Counting