Air Travel Is In a Helluva Mess

As everyone knows, air travel across the U.S. has been in turmoil over the past few days, with literally hundreds of aircraft being suddenly grounded for overdue inspections. According to news reports as many as 250,000 passengers have had to scramble to find other flights or other modes of travel. Amtrak is an obvious alternate choice and a spokesperson for the railroad reports that ridership out of Chicago has been up by some 60% in these past few days. We must assume that’s because of all the cancellations at O’Hare, Chicago’s principal airport.

The traveling public is hopping mad, of course, and with good reason. We can only hope that some good will come from all this inconvenience. If nothing else, it has exposed the cozy relationship the Federal Aviation Administration has developed with the nation’s airlines, the very companies the agency is supposed to oversee.

The chaos of the past several days has also provided fodder for comedian Jon Stewart of The Daily Show, who has poked some well-deserved needles into the FAA which is, after all, charged with making sure U.S. airlines operate safely. Here’s a quote from his television show of a few days ago. (My thanks to Matt Melzer, on the staff of the National Association of Railroad Passengers, who spotted this little gem and put the video clip on NARP’s blog.) 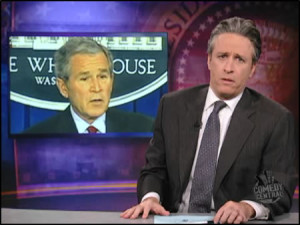 “It’s all sort of ironic, when you think about it. When you fly, you are inspected quite thoroughly, whereas the plane itself is, perhaps, occasionally vacuumed. See, with this administration, if a passenger blows up a plane, it’s a failure in the War on Terror. But if the plane just blows up on its own, hey, that’s the market self-regulating!”

It’s really quite amazing, isn’t it. Every day we’re confronted by yet another reason why train travel makes more and more sense, yet the Bush administration proposes to cut funding for Amtrak by 40% in its current budget. Congress won’t allow that to happen, of course, but it certainly makes you wonder if maybe some of the policy makers in the administration are smoking those funny little cigarettes.