My Trans-Canada Rail Journey Comes to an End

Leaving Jasper, the Canadian moves at an almost leisurely pace, gliding left then right then left again as it winds along mountain ridges and cuts through rocky passes, in and out of shadows cast by massive mountains, the snow on their peaks now dazzling white in the late afternoon sun. 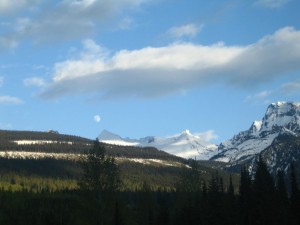 Two black bears come into view on the right side of the train, rooting industriously at the base of a dead three stump and oblivious to the shiny metal machine rumbling past.

An hour later, we meet the Fraser River, not yet the wide impressive waterway it will become when we see it again near Vancouver. It’s far below us here, plunging and swirling over rocks and through crevasses as we follow it in a northwesterly direction. 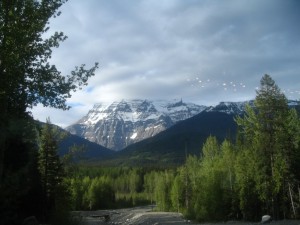 Just as I appear in the dining car for my dinner seating, the steward tells us that we’re passing Mount Robson. At not quite 13,000 feet, it’s the highest peak in the Canadian Rockies. Its peak is obscured in mist, but many of us dutifully grab our cameras and snap away. The main topic of conversation over dinner is about the two black bears – who among us saw them and who didn’t. 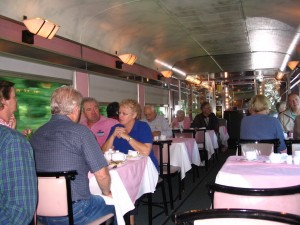 The next morning is my last aboard VIA Rail’s Train # 1. We’re descending through the mountains and the Fraser River is with us once again. Here it roils and tumbles along its descent through narrow canyons, crashing against jeep-sized bounders. For almost an hour I’m content to stay comfortably in my bed, propped up on an elbow watching as the Canadian twists and turns, passing through many tunnels, and the mountain passes gradually give way to the broad fertile Fraser River Valley. 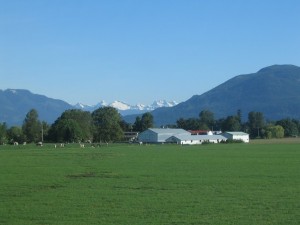 The day is beautiful. Bright sun and clear blue skies set off the panorama of tidy farms surrounded by lush green fields, many with livestock scattered about grazing peacefully. Overhead a bald eagle circles lazily. Off in the distance, well behind us now, the snow-capped mountains provide quite an astonishing backdrop for this idyllic scene. 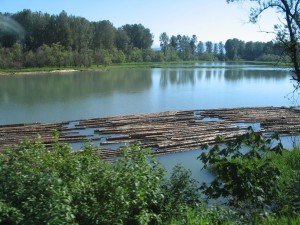 We pass several impressive lumber mills beside the tracks and at river’s edge. Trucks are bringing some of the huge logs, but thousands of others are simply floated up to the mill, lashed together side-by-side like acre-sized rafts. Logs enter the process at one end and milled lumber in a variety of sizes emerges at the other, where it’s stacked, wrapped, loaded onto rail cars and sent back east over these same tracks. Next to each mill are mountainous piles of sawdust and wood shavings. One of the mill workers straightens up as we pass and waves vigorously with both arms.

As the train sweeps around a long, graceful curve, I can see haze in the distance up ahead. Soon we slow to a stop and, minus later, the luxury train, the Rocky Mountaineer, passes us, headed for the mountains we’ve left behind. Moving again, I can see the Vancouver skyline in the distance and find myself wishing the train would slow to delay the inevitable end to the journey.

Minutes later, the train stops, then begins rolling slowly backwards, clattering through a switch and backing into the station. Then, with a slight jerk, we come to a stop and my transcontinental train journey is over.

VIA crews are standing by to service the train for its return trip to Toronto this afternoon and, truth be told, if I had the time and if they had the room, I’d be with them. In a heartbeat.