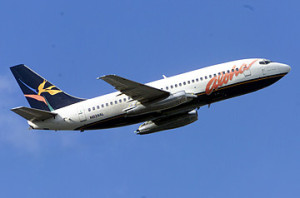 Aloha was predominantly an inter-island carrier, but did operate a couple of daily flights to the west coast. ATA had 12 daily flights between Hawaii and Los Angeles, Oakland, Phoenix and Las Vegas.

Together, the two airlines accounted for 15 percent of the air traffic between Hawaii and the west coast and, as of two days ago, the estimate was that 9,000 people were still here, scrambling for seats on other airlines.

Hawaii’s hotels are offering special deep discounts to visitors stranded here and on Friday, the Hawaii Tourism Authority announced a special fund of $5 million, which will be used for chartering special flights to help get people back to their homes on the mainland.

Some would call it an extravagant use of taxpayer dollars.

We call it the Aloha Spirit.