Finally – Doing Something About Late Trains 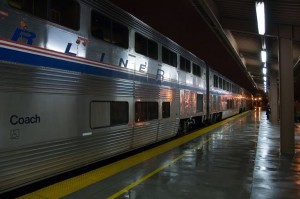 Two years ago, my wife and I were on Amtrak’s Coast Starlight traveling from Seattle to Los Angeles. The scheduled arrival time in Los Angeles is 9:00 p.m., but we were running late. Seven hours late! We would get to LA at 4:00 in the morning, then sit around drinking coffee all day until our afternoon flight back to Maui. Instead, we elected to leave the train in Santa Barbara at just after 1:00 a.m., spend the night in a hotel there, sleep in the next day, then rent a car and drive straight to LAX. The change of plans cost us $400.

The thing is, this mess wasn’t Amtrak’s fault. The Coast Starlight, you see, operates on tracks owned and controlled by the Union Pacific Railroad and over and over again, UP dispatchers gave priority to their freight trains and made us wait on sidings.

Furthermore, it’s not just the Coast Starlight that’s affected. With the exception of the Northeast Corridor between Washington, DC, and Boston, almost all Amtrak trains operating throughout the country run on track owned by the major freight railroads. And delays are the rule, not the exception. Imagine the inconvenience and cost to millions of Amtrak passengers!

But thanks to Senator Frank Lautenberg (D-NJ), we now have a good idea what all these delays are costing Amtrak. The Senator asked for an investigation by the Transportation Department and the report, hot off the presses, has given us the answer: For the fiscal year 2006, all these delays cost Amtrak ONE HUNDRED THIRTY-SEVEN MILLION DOLLARS! That’s for overtime, extra fuel, and lost revenue. And, since Amtrak gets an annual subsidy from the federal government, about a third of that money was generously provided by us taxpayers.

Let me end this post on a positive note, however. My unofficial check seems to indicate that things are improving and, in fact, some long-distance trains often appear to be running close to on-time.

Do you suppose that has something to do with the fact that Senator Lautenberg has sponsored new legislation that, among other things, would whack the freight railroads with big fines for delaying passenger trains? Of course not!