The next morning, my itinerary calls for a train ride back through Montreal and on to Toronto. As VIA Rail’s Train #23 departs the Quebec station, we pass a long row of huge grain elevators. Grain brought from Western Canada is stored here, then shipped out the St. Lawrence river and across the Atlantic to Eastern Europe. 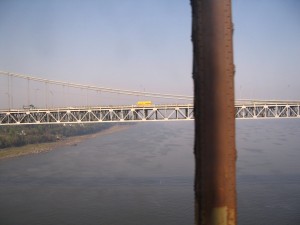 Twenty minutes after leaving the Quebec station, and just after our first stop at Sainte-Foy, the train slows to cross the Saint Lawrence on a massive steel-girder bridge. Parallel to us a few hundred yards to the right is a graceful suspension bridge for automobile traffic.

The morning skies are clear and the trees are leafing out in the warm sun. Regaining speed, the train passes through neighborhoods of modest homes, painted in muted tones of brown and gray and white, but with brightly-colored trims of red or orange or blue. Many of the yards and fields here are ablaze with yellow dandelions, almost as though they are encouraged. In one backyard, a man is hoeing in a small garden. He looks up and waves as we pass.

Lunch is served at my seat and starts with a selection of cheeses, served with bread and rolls and a small salad of artichoke hearts on a bed of couscous. The main course is a choice of pasta, beef or Cornish hen. I opt for a glass of white wine which comes at no charge since I’m traveling in VIA-1 class on this leg. Following lunch, we’re offered coffee and a selection of small chocolates. 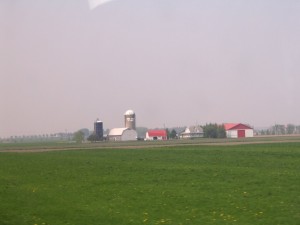 As we get closer to Montreal, the land flattens out again. Three wild turkeys are strutting in a field as we pass. A bit farther on, it’s clear we’ve entered dairy country – large farms surrounded by pastures with herds of black and white Holstein cattle lying in deep, lush grass.

I strike up a conversation with my seatmate over lunch and we discover a mutual enjoyment of train travel. I mention that I have always wanted to take the VIA train up to Churchill on the shores of Hudson Bay. (For several weeks every Fall, Churchill is a very popular tourist destination. Polar bears appear and wander around in this little town waiting for the bay to freeze over. When it does, they go out onto the ice to hunt seals for the rest of the winter.) He grins and pulls a copy of the current VIA Rail magazine out of the seat pocket, flips to page 52 where there is a story about that very trip. It turns out he wrote the piece and by the time we reach Montreal, we’re old friends and have exchanged email addresses. 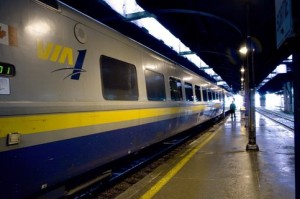 When I left the quaint B&B in Quebec, host Gregg Anderson presented me with a small pin, a replica of the Canadian flag, which I immediately fastened to the lapel of my sport coat. While boarding my connecting train to Toronto in the Montreal station, a VIA employee, an older man, looks at me and says, “You’re not Canadian, are you. Canadians don’t wear those pins.” He walks away, laughing heartily. A young assistant watches him go, then shakes her head and mutters just loud enough for me to hear: “That’s not so.”

The scenery on the way to Toronto is still flat fertile farmland, but the farms are larger and clearly more prosperous than most we’ve seen so far. A variety of crops are in the fields: corn, wheat, barley and grass for hay. A bit later on we pass a picture postcard horse farm, with a stately main house, a large red barn and several out buildings. The pastures and paddocks are delineated by a meandering white rail fence. Minutes later we flash by an orchard of fruit trees – apple or pear – each a giant snowball of white blossoms.

Lake Ontario appears and reappears on our left and seagulls, silhouetted against a mist that shrouds the lake, swoop lazily in and out of the haze. 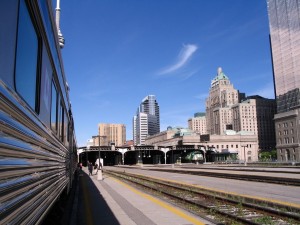 Toronto’s downtown skyline is dominated by towering new high rise office buildings as befits the center of business and banking for Canada. With more than 5 million residents, this is the largest city in Canada and the fifth largest in North America. Toronto is also thought to be the most diverse city in the world, with about half its population born outside of Canada. And as local folk are quick to tell you, this city boasts a generally high standard of living and a very low crime rate.

Wherever you are in Toronto, it’s almost impossible to miss the CN Tower. It’s over 1800 feet tall and, in fact, on a clear day you can see it from the opposite shores of Lake Ontario. There is a restaurant in the tower, but the main attraction is an outdoor observation deck at 1122 feet. It has a glass floor and if you don’t have a fear of heights before you step out onto it, you will forever after. Of course, if you want to go higher, there’s the Sky Pod, up another 323 feet – the highest public observation deck in the world. I did both and am, I truly believe, scarred for life.