The Ocean arrives in Moncton just after 5:00 and the 20-minute stop gives the smokers on board a chance to step off the train for a cigarette. VIA Rail has a large facility here, including the people who handle their reservations system.

Underway again, the train is moving fast now – 80 mph over straight track through a thick forest on either side that passes in a blur for many minutes at a time. Then, suddenly, we emerge from the woods, cross an open field and pass a cluster of small houses. The one closest to the tracks has a small outside deck on which 5 or 6 people, all warmly dressed in fleece jackets, are gathered around a BBQ grill. A woman with white hair is holding an infant and waving the baby’s hand at us as the train rushes past.

The sun has emerged from the overcast and, as it settles toward the horizon off to our left, it appears to follow the train, darting in and out of an almost endless row of pine trees running parallel to the track. The new leaves on the birch trees are pale green and have gone almost chartreuse when backlit by the sun.

I have a 7:00 reservation for dinner and, when I enter the dining car, the steward seats me with a young woman who works for a pharmaceutical company, translating everything from advertising copy to complex medical text from English into French. Veronica is a Montreal native and she cheerfully gives me a list of things to do and places to visit there.

For dinner tonight I choose a small salad, followed by chicken fricassee accompanied by two glasses of a modest, but rather good chardonnay. 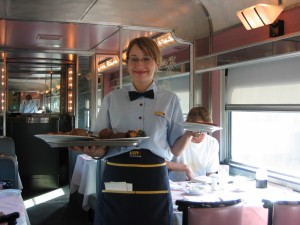 The bustling dining car crew is cheerfully and efficiently serving some 20 passengers. Somehow, instinctively, they know to greet me in English and Veronica in French. Indeed, our server effortlessly switches languages in mid-sentence, saying, as she presents me with a menu, “The special tonight is beef stroganoff and (shifting her glance to Veronica) vraiment, il est tres bon.”

As I finish a chocolate torte, the Ocean slows and clatters across a bridge spanning the narrow-most part of Mirimichi Bay, which is fed by several rivers that twist and turn through the countryside. Off to our left is the silhouette of a lone kayaker paddling into the setting sun on the horizon where the bay empties into the Gulf of St. Lawrence.

It’s approaching twilight when we reach Campbellton and I return to my compartment to find that the car attendent, Joanne, has lowered my bunk, turned down the bedcovers and plumped up my pillows. A dozen pages into the paperback book I bought as insurance against a sleepless night on board the Ocean, my eyelids close.

I waken briefly at exactly 12 o’clock, raise up on an elbow and find the Ocean has crossed into Quebec province and is standing in the Mont-Joli station, which is precisely where we ought to be at midnight.

Previous My Trans-Canada Rail Journey – Part 1
NextThis Could Only Happen on Maui.