In May of last year, I took Canada’s VIA Rail across the continent from coast-to-coast. This is my account of the 8-day trip, which included a total of four nights on the train.

I arrived in Halifax, Nova Scotia, yesterday and just after noon today will be leaving on the start of a rail journey that will take me from here on Canada’s Atlantic Coast all the way to Vancouver on the shores of the Pacific, just over 4000 miles away. Twenty-four hours is not nearly enough time to spend here in Halifax, but I do the best I can with a drive around the city and, this morning, a memorable visit to the Maritime Museum on the Halifax waterfront.

This is where General Sir William Howe organized an invasion fleet before his capture of New York City in 1776. And here, in this vast harbor, is where convoys of merchant ships loaded with the men and material of war assembled before running the terrible gauntlet of German submarines on the way to Europe in two World Wars. 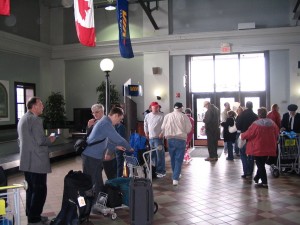 It’s still an hour before the scheduled departure time for VIA Rail’s Train # 15, the Ocean, but passengers are already standing in small clusters in the spacious waiting room of the Halifax train station. Periodic public address announcements come in both English and French and reverberate through the room. Out beyond the double glass doors, our train waits at the platform – more than a dozen cars, in blue and teal livery with a classy yellow stripe. 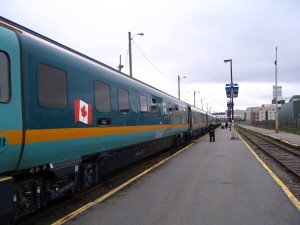 At 12:00 noon on the dot the doors open and the first group of travelers, sleeping car passengers, flow out onto the platform in search of their assigned cars. Mine is number 21, which is five or six from the rear of the train and the attendant, a petite French Canadian lady named Joanne Doucet, greets me at the stairs. She leads me directly to my compartment – a compact room with a comfortable six-foot seat, a bed that folds down from the wall, and a small private lavatory – and briskly takes me through the brief orientation. She points to a telephone handset on the wall and says if I need her for any reason, day or night, all I have to do is pick it up and the portable phone clipped to her belt will ring.

Now comes my favorite moment on one of these overnight train trips: settling back in my private sleeping compartment waiting for my rail journey to get underway. Ten minutes later, after the coach passengers have been boarded and precisely on our assigned departure time of 12:35 p.m., the Ocean begins to move.

This train’s final destination is Montreal, but for me it’s the first leg of a trans-continental rail journey to Vancouver, British Columbia – 4,000 miles to the west and all by train. But we’re leaving Halifax and the Atlantic Ocean behind now, clattering through switches onto the main line and increasing speed as we roll through the city’s suburbs, mostly modest clapboard-sided houses. 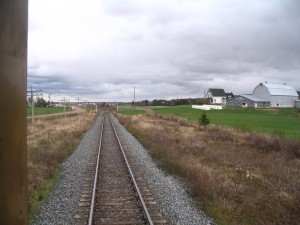 Not more than a half hour later, we’ve left the populated area behind and are speeding through countryside that’s mostly wooded interrupted by occasional small farms. Every few minutes we cross streams that are swollen from the Spring thaw and running at the top of their banks.

Montreal is almost due east, but for the rest of the day the Ocean will be headed north as it loops up and around the state of Maine.

As a reminder that freight is king on North American railroads, our train slows and swings off onto a siding. After a 15-minute wait, a freight train lumbers past headed for Halifax.

After quite a good lunch in the dining car, I take a few minutes to “walk the train.” The Ocean is being pulled by twin diesel locomotives – the “head end” in railroad lingo – followed by a baggage car, three 48-passenger coaches, a lounge car, a dining car and seven sleeping cars, each with ten compartments which, depending on configuration, will accommodate either one or two people.

Clearly, this part of the country has had a lot of rain recently. Freshly plowed fields have standing water in low spots and every few minutes a few drops of rain spatter against the window. There are few signs of any real prosperity here. Most of the farms are small, with modest houses and weather-beaten barns. One small house, just a hundred feet or so from the tracks, displays a yellow ribbon in the front window.

Around 4:00 in the afternoon, still under lowering clouds, we cross into New Brunswick. Shortly after a brief stop at Sackville, the train passes Chicnecto Bay off to our left. Farther to the south it broadens out into the Bay of Fundy, known for tides that can rise an fall as much as eight feet an hour.

We’re back in fertile farmland again, crossing small streams that wind through the countryside. A blue heron glides to a gentle landing at the edge of a pond as we pass. Along the bank of a small river, green shoots are starting to poke up through the brown grass flattened by months of snow. The small farms hereabouts are really cultivated islands in the middle of woods – evergreens, maples, oaks, and birches.
(To be continued)

TOPICS US and Canada