Jim Loomis October 08, 2014 All Aboard Guidebook, Amtrak 1 Comment
Don’t look now, but it sure seems as though a lot of attention is starting to focus on Amtrak’s on-time performance. And it’s not just coming from the usual sources: passenger advocacy organizations like the National Association of Railroad Passengers (NARP). There has been a flurry of stories in the print media and a number of politicians have started to speak out.
Then, of course, there is the case that will be coming before the U.S. Supreme Court probably at the beginning of 2015. The issue to be decided is whether or not Amtrak can have a say in setting on-time performance standards which must be observed by the freight railroads when handling Amtrak trains. (NARP has submitted an amicus brief in that case, by the way … a significant touchstone in our organization’s history.)
It’s hard to over-estimate the impact of Amtrak’s deteriorating on-time performance. Obviously, individual passengers are affected. In my case, for example, just the prudent anticipation that any given train is likely to be late costs me time and money. 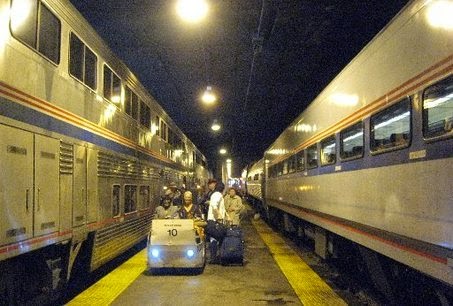 When I travel to the annual NARP meeting in Washington, DC, each Spring, I fly from Hawaii to the West Coast and take the train from there. My two best options are the Southwest Chief from Los Angeles or the California Zephyr out of the Bay Area. Both trains terminate in Chicago, where I connect with the Capitol Limited directly to Washington. But these days, I cannot trust either the Chief or the Zephyr to arrive into Chicago in time for me to make the Capitol Limited which departs at 6:40.
Think about that for a second: the Chief is scheduled to reach Chicago at 3:15 in the afternoon; the Zephyr is due almost a half hour earlier, at 2:50. But these days, I don’t feel I can count on either of those trains being less than four hours late!
And so i play it safe and schedule an overnight in Chicago, paying out of my own pocket for one of Chicago’s expensive hotel rooms, plus no fewer than two meals. That’s an additional expense of at least $300, which I incur because the freight railroads do not give priority to one Amtrak train a day running in each direction.
But there’s a much bigger irony to this: Republican politicians continue to badger Amtrak about the annual federal subsidy required to keep the long-distance trains operating … badgering to the point that, to save money,  Amtrak has stopped giving sleeping car passengers complimentary copies of U.S.A. Today and those little 6-ounce bottles of cheap champagne. And, of course, there’s the big one: coffee is no longer available to passengers in sleeping cars after 9:30 in the morning. (Yes, I’m serious.)
In the meantime, however, Amtrak is forced to accommodate passengers inconvenienced by trains arriving hours late. In updating information for the latest edition of my book, All Aboard-The Complete North American Train Travel Guide, I asked my Amtrak liaison what all the late arrivals and resulting missed connections cost Amtrak each year. The answer? Approximately $140 million … and that’s the same number they gave me for the current edition, which was published two years before their OTP went from not-so-great to really-bad. What’s the actual current number? I have no idea … but it has to be a helluva lot more than 140 million bucks!
Bottom line: there’s a lot riding on the Supreme Court’s forthcoming decision and the more media coverage given to the problem the better. It will be an important decision, one that could actually determine if passenger trains in this country run on time.  Or not.  I hate to say it, and I hope I’m wrong, but knowing that judges Roberts, Scalia, Alito and Thomas are among the nine justices making that decision is not a good feeling.

Previous If We Would Just BUILD the Damn Thing, People Would Come!
NextA Few Random Observations About One Small French Town.